On the heels of the #metoo movement, women are being empowered all over the globe. Just this past week, Saudi women were given driver’s licenses and Mrs. America is scrapping the swimsuit competition to focus on individual accomplishments. It is clear that there is real momentum to this movement and we think it’s awesome. This is why we have a Spector™ specifically focusing on corporations with female leadership, called “Leading Women.”

Not only is this a most worthy cause, but there is also real evidence that investing in women leaders could be a winning investment strategy. Research from Scandinavia’s largest bank, Nordea, shows that “companies with a woman in the chief executive or chairman role have performed far better than a major global index over the past eight years,” (according to an analysis of nearly 11,000 companies globally). It determined that the annualized return for female-led firms, based on an equal weighting, was 25 percent since 2009, compared with just 11 percent for the broader market.

Credit Suisse also found similar results in one of the largest research reports conducted on the subject. They tracked the gender mix of 28,000 executives at 3,000 companies in 40 countries and compared the data to the financial results of those companies. Stefano Natella, Credit Suisse’s global head of equity research, notes:

“There’s a very strong outperformance of companies that have women in management, particularly in operational roles… It’s almost as if there’s a symmetry to it. Companies where at least half of the key ‘front office’ jobs were held by women had average annual returns of 28.7 percent, compared with returns of 19.1 percent for all companies, 22.8 percent for those where a quarter of the top jobs were held by women, and 25.6 percent where at least a third were filled with female execs.”

However, the  reason why female execs deliver better results is less clear.  Robert Naess, the manager of $42 billion in stocks at Nordea Bank AB, suggests that women tend to be more conservative in their predictions, leaving more room for positive surprises. He also says the fact that only the very best women make it to the top means they’re just higher-caliber people than a lot of male CEOs. Others feel women tend to be more creative and willing to try more progressive strategies.

Regardless of the reason, those kinds of results speak for themselves. And here at DreamWork Financial Group, this combination of worthy cause and financial performance is exactly the type of investment theme that we are excited to get behind and promote.

If you’d like more information on our “Leading Women” Spector or any of our other offerings, don’t hesitate to contact us.

Broker vs RIA: Which one serves you? 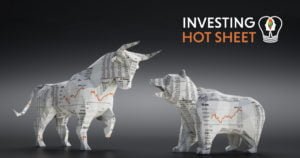 Spector™ Spotlight: What is a Spector™?

Spector™ Spotlight: What is a Spector™?

May 18, 2018
Spectors ™ are Specific, Theme-Oriented Investments (SpecT-Or). In a nutshell, they are investment models, which try to capitalize on certain individual themes or trends by using individual stocks and low-cost ETFs. Read More...

Where is Your Money Invested?

September 11, 2018
You’re investing to secure your financial future. But one day you realize you can’t answer a fundamental question: Where is your Money Invested? Read More...

July 16, 2018
In the US, we love our pets! This Spector™ Spotlight focuses on Pampering Our Pets, our Spector™ devoted to companies who provide for our furry friends. Read More...

Choose the meeting option that works for you

Meet our Chief Financial Strategist, Clint Kirby, and learn what makes DreamWork different from our competition.